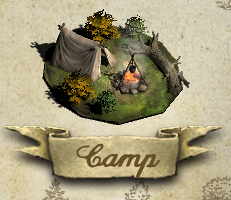 Creating and modifying a camp is one of the actions, available while in Area map view. Camps improve your chances of survival during the nights out in The Forest.

Creating a camp can done by a button above character's head and costs 10 Stamina. It represents the effort of the character to find a suitable, well hidden place for camping in the area. Each area, besides The Village can contain one camp.

All characters, which remain in the area during the Night Phase, benefit equally from the camp - it does not matter who established it.

Each camp has a storage, which can be used for safekeeping Items, but only in case there are villagers there during the Night Phase - otherwise the items or the whole camp might be gone the next time the area is visited.

Chances of a camp being discovered by monsters during the Night Phase are increased by several things:

Upon discovery by a large group, most players are instantly killed. Only the lucky will survive, and those with the "Scout" Trait have an advantage.

Upon discovery by a small group, the Creatures decide whether to attack. The following things reduce the chances of them attacking:

If the Creatures decide to attack, they deal damage to the villagers. The factors, reducing theis damage are the same as those, affecting the decision to attack.