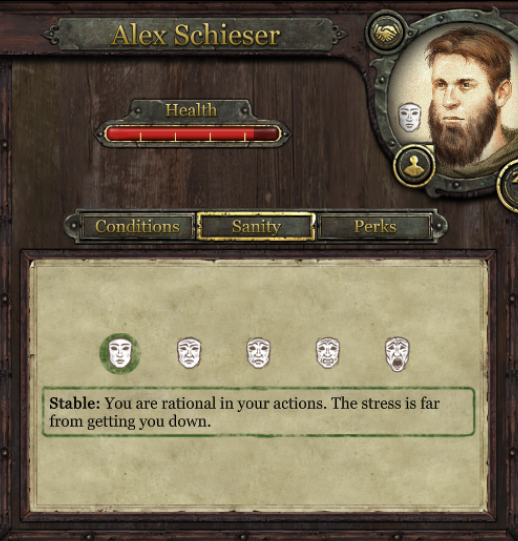 Sanity is one of the three primary statistics of The Character and it measures your physical condition - can you think rationally or are you near losing your mind.

The default starting value is 70. The lower it gets, the more negative Sanity-related Conditions you will receive.

Sanity state is indicated in the second tab of the Character screen, as well as with a mask, representing one of the 5 possible states.

High Sanity directly results in bonus on most actions and vice versa - low Sanity leads to penalties. This happens through the "Invigorated" and "Stressed" Conditions.

Lower Sanity has additional negative impact on The Character, which happens through 5 Conditions - Depressed, Hectic, Terrified, Disoriented and Insomniac. The order of gaining and losing them is mostly random, though some reasons of Sanity loss may be more likely to result in specific Conditions. Note that the defined number of those is different when increasing and decreasing Sanity, so when you are on downfall, it will take some more recovery to start losing negative Conditions and vice versa (hysteresis effect).

This can also be explained with the following table:

Unlike Health, losing all your Sanity will not lead to Death, but the resulting Conditions may put the characters in extreme danger or render them useless for some tasks. Both Health and Sanity are difficult to recover, thus their loss should be avoided as much as possible.

At any moment[edit | edit source]

Sanity is restored mainly during the Night Phase and the best way to increase it fast are the Romance and Socialize evening actions. Since "Injured" Condition is often a significant reason for Sanity loss, Healing is a good way to reduce that loss.

At any moment[edit | edit source]

The Maximal Sanity value is permanent for each character and is affected only by two Traits: