In Grimmwood, all areas, outside The Village are simply referred to as "The Forest", regardless their terrain type.

The Forest is the source of all resources and Items, that the villagers can find and gather, but it is also a dangerous place - it is inhabited by many Creatures, most of which dangerous and hostile.

Map of the Forest[edit | edit source] 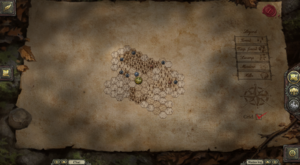 The Forest is considered to be immense, but for the purpose of the game, only a small part of it can be explored.

All information is shared among all players.

Distance is the number of areas you have to travel to get from one area to another. Neighboring areas, for example, are considered to be at distance 1.

The players can move from one area to any of its 6 neighboring areas or scout those as well. These areas can be one of tree types, according to the knowledge (always shared among all) the Villager have about them: 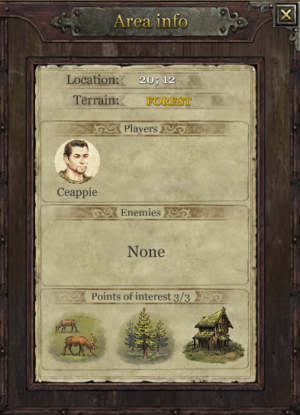 The other parameters of an area are number of known/unknown Points of interest, Monsters, Villagers and Items, that they contain - all there can be seen on mouse over or in further details - by left-clicking on the area.

The map is randomly generated, though there are some rules, that are always kept:

There are 5 terrain types and they differ greatly from one another by the following specifics:

The terrain types are:

* This is the default travelling cost. For more info, check Mobility.

** Note that these are just the most common Points of interest. Besides those, almost anything can spawn everywhere.

Each area (hexagon) of the Map of the Forest can contain one or more markers (icons), indicating important objects in it.

Each Area map represents a large location, in which Creatures and Points of interest might be present, as well as other players. 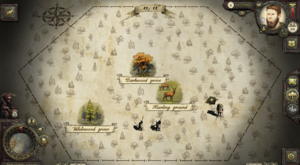 Players can see the area map of their current area by clicking the "Area map" button in the right side of the screen. Players cannot see Area maps of other Areas.

All actions outside of The Village are performed on that screen: