One of our favorite questions at BMG is “what if?” We simply love to look at things from unexpected angles. The Unicorn seemed like a perfect opportunity to break some stereotypes.

After going through, again, the “Valiant Little Tailor” story by the Brothers Grimm we asked ourselves – what if the Unicorn is indeed not such a fair creature? No, no, forget the “dark unicorn”. Same as the original but painted black and with red glowing eyes. (Come on, you must’ve seen at least one such awful piece of fan art J) We’ll keep the horn and the horse-like silhouette, but apart from that – let’s go for totally different creature. A quite scary one at that…

Right out of the gate our concept artist, Phil, came up with a fantastic concept we all absolutely loved. A creature that oozed menace, a four legged cross between a horse and… a raptor! Sadly you won’t see it in the game. It just didn’t stick with the game’s fiction. You see, letting your imagination roam free is one thing, not giving a damn about the world’s consistency – something totally different. 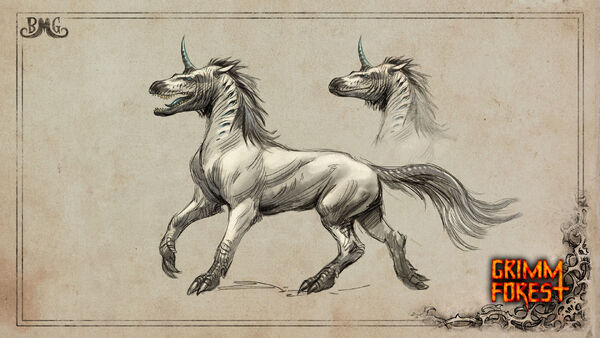 Back to the drawing board, literally. This time, instead of the raptor, we threw a more likely candidate in the mix – a griffin. It should be obvious, hopefully, but the idea was to only use it as an inspiration and not to go for a “direct quote”. After all, what’s the use of avoiding one cliché only to fall flat for another one? 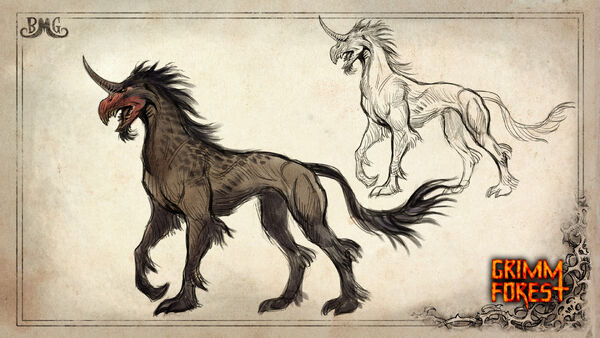 We like the new version a lot. Seems like a real scary beast to us. Scary but elegant J No worries though, it will be quite the rare sight in Grimm Forest, amongst the legendary creatures in the forest. You’ll have to travel high and low before even finding this beast’s tracks. And then, only if you’re lucky (or unlucky) enough, you might hear its roar in the distance. Confronting the Unicorn will be surely one of the toughest challenges you’ll ever encounter in Grimm Forest. But if you’re good enough, prepared enough, and clever enough, and you manage to defeat it, the rewards will be fantastic!